in Southgate Ave, just a short walk from our departure point.

The Offshore and Specialist Ships Australia museum collection, including ship models, artwork, photographs and memorabilia are located within the Mission to Seafarers – Victoria building at:

Due to Covid-19 Exhibtion is closed until restrictions are lifted. The Mission to Seafarers opening hours are: “Specialist Ships made Australia – How?” OSSA is very pleased to have two major supporters for our forthcoming Exhibition at the Docklands Library:

Sinwa Australia Pty Ltd will be well known to most of our members having been involved with supplying goods & services to the Offshore industry for many years.

OSSA is very thankful to both organisations for their generous support. More information can be found about both companies on their respective website.

Where: The Dock Gallery 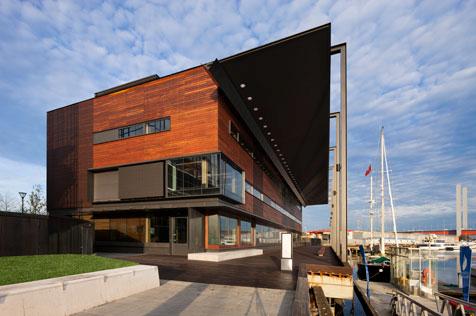 OSSA in conjunction with the Be-Connected Program are holding an information session and Free BBQ at the: Where: The Mission to Seafarers Victoria.

On Monday 21stJanuary Members Reg McNee, Leigh Webster and Steve Street travelled down to Port Albert to the Maritime Museum there with some of OSSA’s artefacts to install a pop-up exhibition which will be on display for a few months.

The Museum is situated in the old Bank building in the Main St of Port Albert. The latest news is that the exhibition is being well received. Steve will be monitoring this as he will be in the vicinity regularly.

We also thoroughly recommend a visit if you are going to be in the area or are looking at having a day out in the near future. Google Port Albert for all the facilities available in the region.

We will of course publish some text and lots of photos of this pop-up in our next edition of the Newsletter ‘OSSA Link’ due in mid-March. An exhibition of ship models, artwork presented by Offshore and Specialist Ships Australia.

Specialist Ships and the Seafarers that crew them have been (and still are) a very valuable asset to Australia. They have helped in the exploration, development and management of the wealth of offshore resources around the coast of Australia.

Australia’s offshore oil and gas has been a spectacular success since it started in Bass Strait over 50 years ago with Esso-BHP, Shell, Woodside and others. This gave birth to a new maritime industry that in turn provided work to a whole new generation of Seafarers.

Offshore & Specialist Ships Australia (OSSA) was formed late 2017 to preserve and publicly display and educate the history and memorabilia associated with the Offshore Oil & Gas industry and other Specialised Ships that have been operated from Australia. In co-operation with the Mission to Seafarers the memorabilia and ships models will be publicly displayed.